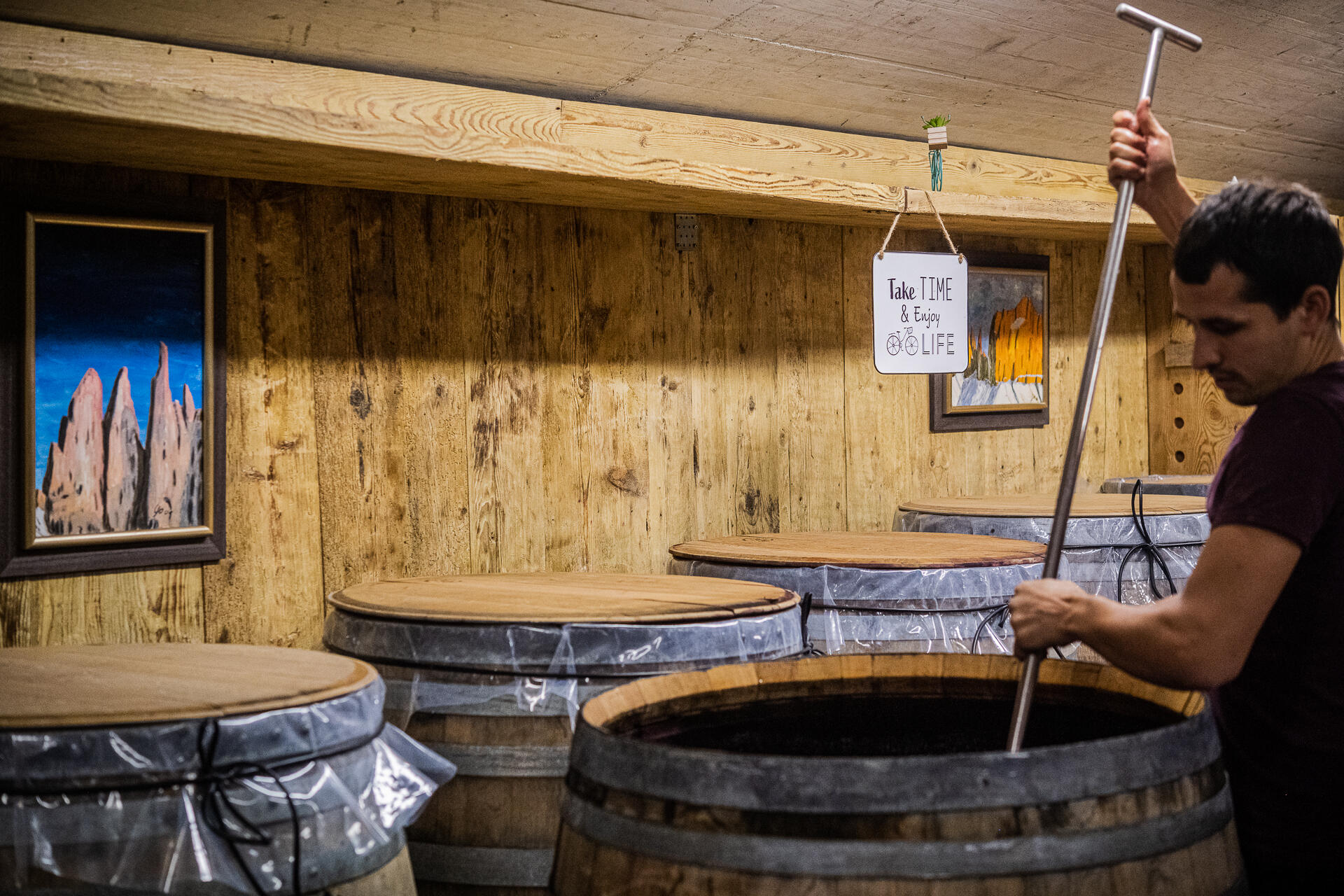 One batch, the “freshness batch”, was directly pressed using the white wine method commonly used today (very gently with a maximum pressure of 1 bar). After natural sedimentation of 24 hours, the wine was removed from the sedimentation turbulence. The subsequent fermentation took place at a controlled temperature of 18 ° C for a period of 7 days.

The second batch, the “kick batch”, was fermented with the mash like an “orange wine”, which means that the must was in contact with the entire grape (skins, seeds, panicles) during fermentation and thus achieved a maximum Extractions from the grape. At the end of fermentation, this section was also gently pressed and expanded separately.

Both batches were stored separately for 10 months in steel barrels, only a small part (225 liters) was stored in a used barrel to give the wine an additional complexity. The wines were stirred weekly until December (yeast battonage) to keep the wine in contact with the lees. The wines were then drawn off in January and matured on the fine lees for the next 8 months. In this way, the character of the variety is retained and not influenced too much by the yeast lees.
In July (1 month before filling) the 2 batches and the barrique barrel were blended and roughly filtered and slightly sulphurized.

My interpretation of the “Principessa” shows what can be hidden behind an aromatic grape variety if you think outside the box and break new ground. Due to the mash fermentation, the aromas, which are often pungent to me, take a back seat and thanks to the light tannins, the wine is easy to drink with a nice freshness. The typicality of the grape variety remains recognizable, but it is combined with a freshness and complex component.

Due to the lower alcohol content and the higher acidity, this vintage tastes much fresher and fruity, as one is not actually used to from a Lagrein. The combination with the fine tannins and the dark ruby red color results in a versatile taste experience that 100% reflects the vintage.

With this very complex and time-consuming vinification, I want to push the potential of the grape variety Vernatsch to the extreme.

Cabernet Sauvignon is known for its typical smell of black currant and the soft, noble tannins. Through the long contact with the mash, an attempt was made to achieve maximum extraction of the grapes and thus elegant tannins. The wine has a nice fruity note with elegant tannins and a long finish.

Cabernet Sauvignon is known for its typical smell of black currant and the soft, noble tannins. Through the long contact with the mash, an attempt was made to achieve maximum extraction of the grapes and thus elegant tannins. The long aging in wooden barrels has given the wine a certain complexity and rounded off the tannins.

“A Manetta” means “full throttle”, and that's what this wine expresses for me. It's a wine with character. The freshness section ensures a fresh and fruity taste with a good, persistent acidity. The waste with the "kick game" gives the wine that certain something. The tannins contained in it from the must fermentation ensure additional complexity and a slight astingency.